It is explicitly stated that for the express benefit of “you” who will henceforth be referred to as the “reader”, that,  restaurant reviews will hereinafter be tagged sappaadu.

It is a sad sign of our times that we are losing the rain forests to global warming, wanton deforestation and thoughtless naming. I will be talking about the last one on that list. In Gandhi Nagar, near the Adyar signal, there exists a cave like restaurant that features several stuffed toys (monkeys, deer and snakes) hanging from its faux-rocky roof. Occasionally, somebody will press a button and some of the soft toys will start to twitch like suffering from an epileptic fit. And oh, there are 2 guys who roam around in an Osama suit and a cannibalistic monster suit respectively.

In short, the only connection this place has with its theme is the artificial rain soundtrack that they play in the background.

The food, on the other hand, is pretty good. Large sized portions and a fair bit of variety on the menu. I considered the “Sizzling Panner” for a moment, but decided to ignore it and punish them for their careless spelling instead. I had instead, a suitably creamy baked vegetable au-gratin (pronounced “oggradin” by the waiter) and a wicked looking crispy fried baby corn and mushroom.

7/11 (yeah. Im strictly anti-decimal)  for the food and -4/13 (I am also triskaidekaphillic) for the ambience. If a restaurant is named “Rainforest”, I expect, at the least, robotic creepy crawlies, 3 foot soft toy centipedes and fish tanks with piranhas. The waiters must also be dressed like poison-dart frogs 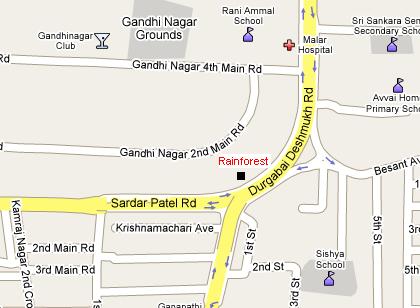