Why is The Hindu a dutiful child with bright, shiny and healthy teeth?

Because, it mostly copies The Guardian and pastes a lot.

Update: I am informed by James that the amount of copy pasting is not enough to warrant the joke above. So readers be informed that the above exists just for joke’s sake.

Well, not the news items or editorials, which are creditably original and dreadfully dull, but the crossword, which in particular, is rather unoriginal. I fail to understand why we (Indian cryptic crossword buffs i.e.) must continue to be adept at

Don’t we have crossword setters who set their cryptic clues with much more localized context. Imagine the possibilies for subtle and allusive clues with all our diversity.

ps: Readers who are not fans of cryptic crosswords, it’s a little hard to squeeze in a guide in a blog post. But suffice to say that solving a good cryptic is one of life’s great pleasures. Cryptic crosswords stretch one’s brain into interesting shapes and directions as they demand quite a bit of lateral thinking.

For e.g. how would we design a Chennai-centric, contemporary English cryptic crossword for The Hindu? Plis to excuse for the poor quality clues and shady crossword structure for I am not a pro at crosswords. Perhaps she should start doing this. 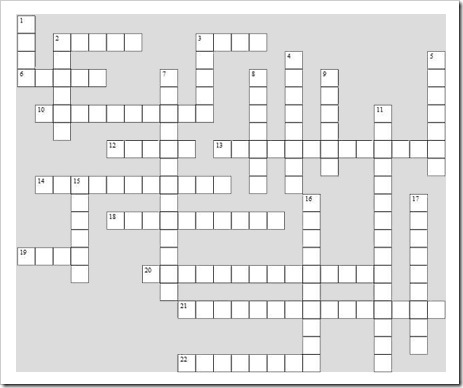 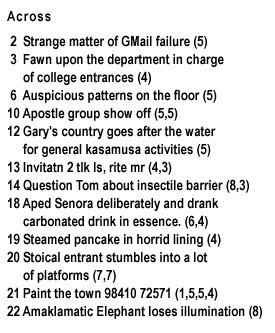 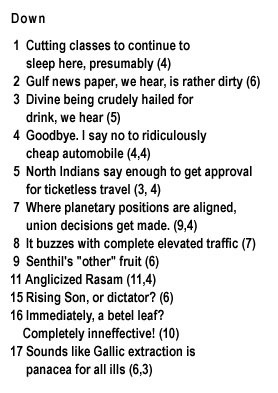 The solution will be posted early next week. Feel free to post answers in the comments section.

Update: Oh well. Looks like Scudie , Praveen and Siddharth have solved pretty much most of it. So here’s the solution, along with the fundaas.