First off, I am just back from a short trip to Germany, Finland and Estonia, and I have been surreptitiously consuming large quantities of chocolate filled with Finlandia vodka. So if this post seems a little, well, highly vague, you know what to blame.

Legend has it that Lord Rama was humming Karaharapriya while he was returning back to Ayodhya from the South. As he reached the gates of his palace, he had gotten tired of the raga, and once in a while casually dropped the “pa” thus occasionally suggesting shades of Shreeranjani. And that is why North Indians traditionally drop the “pa” in Deepavali as a tribute to this display of musical carelessness.

Of course, I just made that up.

Today is Deepavali, and the while the asuras will mourn the death of their hero, Narakasura, killed by what they will claim to be rather a unethical trick, most people in the South will be busy bursting crackers, hogging sweets, transferring their life savings to cloth merchants in T Nagar, and eating Deepavali Marundhu (Home made Chyavanpraash, that my grandmother used to refer to as Syavanapragaasam) to digest it all at the end of the day.

Talking of crackers, my brother and me had a conversation today morning about Sivakasi box artwork. The imagery on cracker packaging has mostly been in tune with the times. For instance, last year we saw this. But this year, they seemed to have dropped the ball. For instance, I expected to see at least this minimal change from last year: 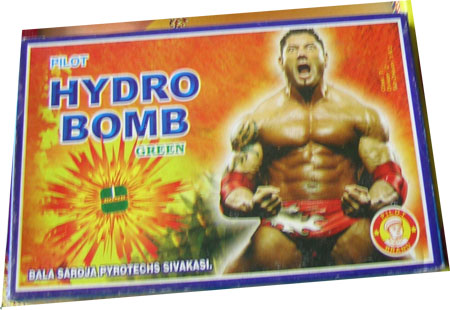 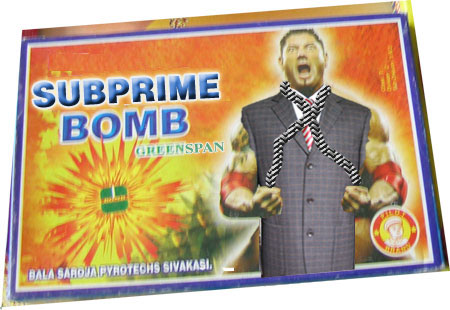 They could have had so much fun this year. Imagine:

As we travel north though, the Deepavali legends traverse across avatars as well, but in reverse direction. So Krishna:South => Rama:North. But wait, we are missing a step in between. So perhaps there should be a Balarama legend in Madhya Pradesh, so we can have this nice inverse relationship between avatars and Indian geography with respect to Deepavali legends.

In the North, Diwali is celebrated a day later, because Lord Rama did not call Scotty and tell him to “Beam me down to Ayodhya”. He is said to have borrowed Ravana’s private jet, but I have my doubts. Flying direct to Ayodhya would have taken only a couple of hours, not an entire day. So my guess is that they took the jet to Delhi, and then took the train to Ayodhya, because that place lacked an airport (I believe it still does).

Now Sikhs, being generally more astute than the average North Indian, realized that Lord Rama was actually singing Karaharapriya and not Shreeranjani, and decided to bring the pa back, and that is why they call themselves Paajis. Additionally, it turns out that it was on this auspicious day that Emperor Jahangir released Guru Hargobind Ji from prison in the Gwalior Fort. So they celebrate Diwali too.

Among other legends, it is also the day Mahavira smelled some teen spirit.

But the spirit of Deepavali is global. Mythology aside, even Luke Skywalker and Frodo Baggins were deliverers of light. After all, Luke and his band proved that a thousand bijli vedis are more powerful than one big spherical Hydrogen bomb, and Frodo managed to drop Sauron’s Lakshmi vedi into a puddle of water.

But while the idea that light triumphs over darkness is universal, recent developments in physics are threatening to um..well..do the sort of things to this idea that black holes do to matter. Apparently, most of the universe is pretty dark, what with dark energy and dark matter being more common than good ole’ light and regular, touchy-feely matter. It’s almost as if the universe began with a totally grand Deepavali, and I mean, a singularly (wink wink) big Deepavali, and then pretty much decided to go dark from then on. It’s like someone said “Come to the dark side, Luke”, and the universe said “Oh well, alright”. As Nostalgia Inavardaysanathan Mama often used to say – “In our days, there used to be so much light, but today’s youngsters (young stars)? I see no hope for them in the (event) horizon”. Little did I realize then that his daily complaints about the youth had truly cosmic references.

But let not Darth Universus cast a shadow on the happy festival Deepavali truly is. There is a lot to be learnt from this festival despite all the gloom and doom in the global economy (and in the universe in general). Perhaps we all need to learn from the ecological prudence of young, not-so-privileged children in Madras who will salvage the chemical mix of unexploded Deepavali ordnance to make their own crackers.

Have a joyous, safe and environment friendly Deepavali.