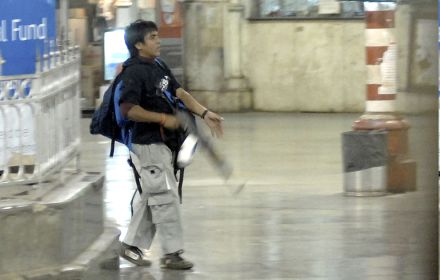 Was it the virgins or did you expect to be back home after your exploits in Mumbai? I am also told that your brainwashers don’t necessarily specifiy  the gender of the virgins supplied in the Mission-Accomplished-Bar you guys chill out after your courageous displays of blowing up unarmed civilians. In my opinion, I don’t really think virgin women (and men) dig your kind of kill-for-statistical-glory bravado. Playing video games involves more bravery because the AI at least shoots back.

So what was the point really? To shut India down? So you think repeatedly attacking Mumbai enough times will push it over the edge into collapse. Um. Not going to happen, and I am not speaking with chest-thumping Rambo-style aggression, or Dubya style bring-it-on fake machoness. I know my India well enough to know its limitations. We have our fair share of corrupt, ineffective politicians, a slower-than-a-three-toed-sloth administration, a crippled alertness and rescue infrastructure, and an educated middle-class that mostly does not participate in the democratic process. We also have people like Raj Thackeray, but the India I know is not likely to panic and indulge in an overdose of security theatre. I speak as someone who has lived in Mumbai in the past and studied at OLPS, Chembur for a couple of years, eaten its Vadapav and wolfed down its Pani puri. Listen to this. While the NSG was flushing you guys out of the Taj, the city was already back on its feet, back to doing what it does best, learning from its mistakes and moving on.

Guess what. The city will slowly, yes, painfully, learn, and do what it needs to do to keep itself safer. Mumbai will demand that the administration be better prepared, and that a local version of the NSG be created. Mumbaikars understand something that your guns and grenades cannot blow away. They understand the myth of 100% security, and that it’s more important to live and enjoy one’s life while being sensibly prepared for the worst. That spirit, I am told, is more or less bomb proof. The people I’ve been following on Twitter and occasionally on TV all exemplify this attitude. While our media will chew on this fodder for a few more weeks, the city will take a deep breath, commit to memory, and reboot.

Other minor matters. One hears that the plan was to “Marriot” the Taj? To bring a historical building down and sear the collective consciousness of an entire city?

Again, no misplaced pride here. Perhaps a slightly better understanding of civil engineering might have helped, but then again, had you guys paid more attention to the teachers in your school than the brainwashers who packaged a suicide mission as a go-buy-some-candy-for-me request with a return plan, you might have learned enough to call their bluff.

A small request to the Taj hotel management. How about a one-week, all-expenses-paid vacation for these guys at your hotel? This was about the only time they could have afforded to sit in your reception 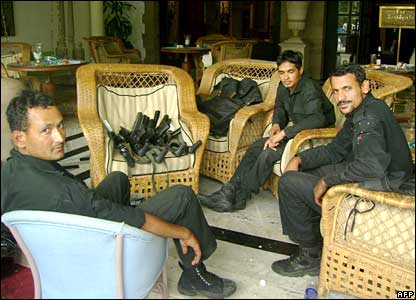