Good stories are memes. They tend to spread, not merely by faithful reproduction, but despite purposeful remixing over the years. The Mahabharatha is no exception. The story grew in its telling and it is now embedded firmly in the Indian psyche. But I do not think we are doing enough to remix the fundamental themes in this epic. Thanks to BR Chopra and his garish, un-nuanced and heavily sanitized version that played over several years on Doordarshan, we now seem to have a stultified view of the epic. Gone are the gratuitous references to violence, the overall original darkness of the plotline, gore and the downright weird (by modern day standards) social practices and mores, as our collective idea of this epic has been reduced to overdramatic acting, fake jewellery and arrows duking it out amidst questionable looking fireworks. And let’s not even get started on the background score.

But to be fair to the Doordarshan version, a literally faithful take of this epic would have probably bought the Pandava Sene to the fore, demanding that such vile and Un-Indian representations of the epic be banned, and all of us sipping on our gin in Irony bar would have chuckled.

So after this impassioned plea to release our epics from the cruel stranglehold of Desi Television, you must be expecting a profoundly new vision for Mahabharatha 2.0, a bold, contemporary and yet very Indian take on the epic, and I am happy to inform you that it will not be the case. What I present to you instead is more on the lines of a stunningly inane attempt at blending the best (?) of the Internets with some of the key events in the epic and hoping that all your bases are belong to my cheezburger which can has madness as well as Sparta to which you might ask “O Rly?” and my response would be “Ya Rly!” 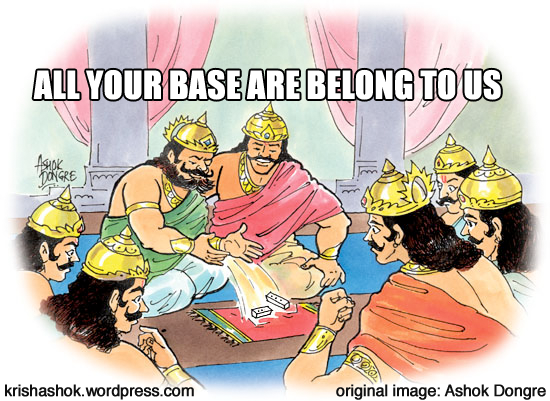 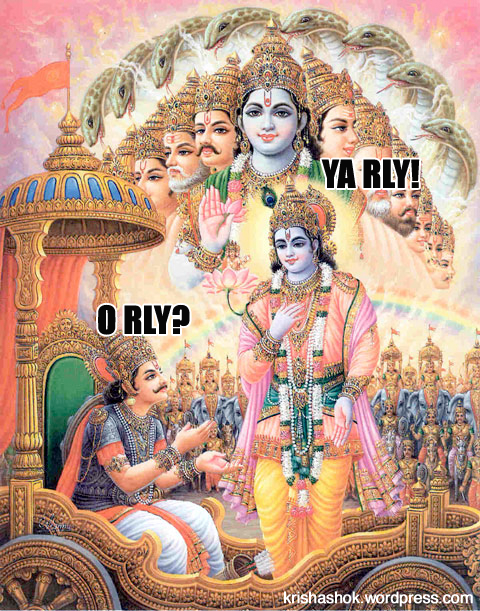 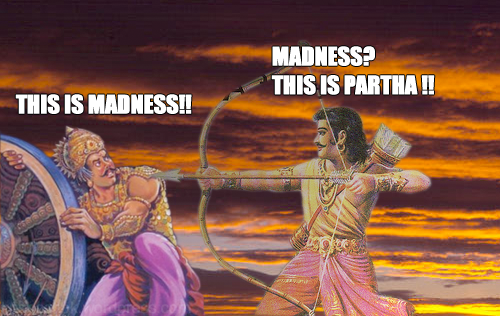 Perhaps we should create a Lolcat version of the epic after all.