Did you know that regular urban crows in Madras, the ones with the grey neck have a caw that is distinctly atonal and harsh sounding compared to the larger jungle crows (Ravens, Andankaakka), which have a softer, tonally pleasing caw despite their unfortunate (and mythical, I might add) employment as Yama’s messengers. Perhaps it was by design. If ravens are harbingers of doom, it makes a certain morbid sense for them to have a more pleasing ‘harbinging’ voice so that they can say – “You are all about to die” but say it in a dulcet voice that softens the impact of the message.

I once tried taking my guitar tuner near a raven to measure his caw frequency, but the crow did not seem very comfortable with that situation. He let out one brief caw before flying away, and that registered at E flat momentarily on my tuner. Next time, I hope to try this experiment by leaving some rice and the tuner right next to it (and hope the crow does not get interested in Korg tuners). Of course, since I cannot see the readings on a tuner from a distance and the tuner does not record its readings, I will have to leave my cellphone (with its video camera running) near the tuner (and hope the crow does not get interested in touch screen mobile phones). Or I could try Puppy Manohar’s brilliant solution

That apart, jungle crows tend to be loners while these greynecks stick together, like birds of a feather and all that. Greynecks are also smart. They will collaborate to steal food from dumber animals. I have seen them cheat my neighbour’s hapless Labrador of his snack biscuits by co-ordinating a smooth distract-and-pilfer manoeuvre with one of the crows first making enough noise to convince the dog that it is worth his effort to leave his biscuits, lift his bulky labrador body and come chasing after the crow. The dog of course obliges and chases after the bird. The crow then says “caw-caw-caw-ca-ca-caw“, which translates to “How is it that you never seem to remember that I have wings?” and flies away to safety. The dog, with his characteristic labrador fat tail wagging furiously, tongue hanging out and panting, is now mentally cursing himself, not for forgetting that crows can elevate themselves, but for forgetting that Mr Crow probably has an accomplice who is, at this very moment, picking up his biscuits and saying “caw-caw ca-ca“, which translates to “So long, sucker”. He then goes back to his spot, dejected, and lies down with his jaw resting on the ground and puts on his trademark sad-eyed look that says “I could do with a few more biscuits”. I could walk up to him at that moment and read aloud Lonely planet’s review of Madras and he wouldn’t care, unless he smelled biscuits on me. Dogs can be remarkably sophisticated when it comes to the incredible simplicity of their lives.

Now, why am I telling you all of this? Because I promised to.

And also because, 300+ comments, regionalist hate, and an unchanged Lonely Planet entry later, I needed a therapeutic post. Because Lonely Planet does not matter. In my desire to rebut their craptastic overview, I had to assume that their review actually matters in some meaningful sense, because unless they mattered, my post wouldn’t matter and if my post didn’t matter, I wouldn’t have posted, and since I did, this ridiculous chain of illogic must come to an end somewhere. Let’s just say that it was just one of those xkcd-esque moments. Somebody was wrong on the internet, and I had to get involved.

If you want to read a real introduction to Madras, read maami’s, not Lonely Planet’s. 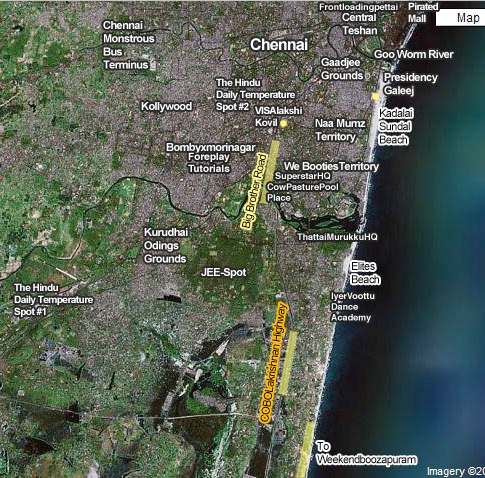 And I also give my neighbour’s labrador some Tiger biscuits. He approves.

50 thoughts on “What was I crowing about anyway?”