Here is part 1 and part 2. Barring the occasional edit, this is more or less untouched, although I have cut out an entire section from the end to keep the length manageable. This is the final part.

The sugar syrup vending machine now had a security guard who was checking ID cards before letting us fill our cups. 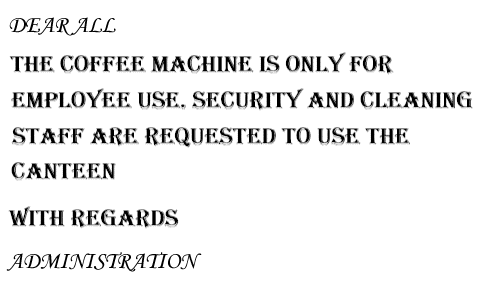 The guard dutifully squinted at our ID cards and used advanced CSI like techniques in his brain to age-advance and match the faded 15 year old photo of my manager (with a full head of hair) with his current dopey-eyed bald look. Satsified, he opened a dusty cupboard with a small key and let us have our plastic cups. He also made us fill a “Cofee Register” with fields such as name, employee number, number of cups, date, time, signature and for some reason, “remarks” as well.

I put in “Did not eat breakfast, therefore fortifying myself with concentrated sucrose syrup” in the remarks column and the both of us started walking back to our work area.

“We have issues”, declared my manager, in a tone of voice that might have announced that the Spartans had attacked our city.

“Issues? What issues?”, I asked, in a tone of voice that suggested that I thought the word “issue” meant children

“We have an escalation”, he clarified, in a voice that might have announced that I had AIDS

“Who escalated what?”, I queried, in a tone that suggested that the only escalation I was aware of was the one to heaven while a lengthy guitar solo played in the background

“Onsite”, he said, in a voice ominous enough to suggest that the people he was referring to had the numbers 666 hidden in their scalp

“But we made the deliverables on time”, I exclaimed, sounding like an advertisement for a Swiss watch

“Onsite did not receive the email attachment”, he interjected, sounding like the “before use” part of an ad for Amrutanjan

“But we zipped it, rar-ed it and LHarc-ed it till we got it to under the 1 MB email attachment limit we have”, I said in the desperate voice of an Arab peasant telling the crusaders that he was just a human being

“But we failed to meet stakeholder expectations”, he said in a disappointed voice that suggested that we had missed a dinner appointment with Rajinikanth.

“But…”, I started, and ended, like a soggy 100-wala on Deepavali. We had reached the door to our work area. We made the necessary register entries and walked in.

“We need to have a meeting”, he declared in the voice of a euthanizing doctor just about to pull the plug on someone.

“I can handle this offline sir”, I said, desperate to avoid “the meeting”, which meant email invites and worse, reminding people on email, IM, SMS, phone and in person

“We need to fine tune our contingency plan and streamline our onsite-offshore communication”, he said, like an art critic complaining that the Mona Lisa needed a bit of work

“We did that last week”, I pleaded, like a prisoner whose parole applications had been declined repeatedly

I resigned to my fate and sulkily walked back to my desk, hit ctrl-alt-delete to log back in to my workstation. Windows wanted to update itself, and it gave me 2 options, Install now and Install a few seconds from now. I sighed, let it reboot and used the intervening aeon to do testicular surgery on my mouse. I used my nails to remove all of the gunk that had accumulated in the roller mechanism and looked at my monitor, only to find out that Windows had installed some new software and it would be mighty nice of me to let it reboot again. Suppressing a desire to throw my machine out its own namesake, I obliged and let it reboot again. I thought I’d charge my phone in the meanwhile, so I changed into cave diving gear and embarked on an expedition beneath my table to find the plug point. I hit my head and twisted my ankle while softly cursing at the school of IT office interior decorators that teaches its wards to make every plug point innaccessible. I eventually found it and realized that the points were so closely spaced that my bulky phone charger would not fit in along with the rest of the plugs already there.

I was now in that stage of that uniquely male frustration when brute force is considered a valid option for any and all problems. I squeezed in my phone’s charger plug through that geometrically unfeasible gap and when I was satisfied that electrons would have enough contact to flow, I extricated myself from under the desk and rubbed my hands of the dust that had now deposited itself on me.

I looked at my monitor, and to my horror, it was blank and that’s when I realized that my brute force insertion of the phone charger plug had disconnected my workstation power supply. I cursed, and got under my desk again to remove my charger, which was now tightly wedged between the other plugs. In utter rage, I yanked it hard, and briefly made contact with 220V/5A of electricity.

I convulsed, jerking my hand away from the plug, hitting it painfully against the underside of my desk. I lay down, in the darkness beneath my desk, with no desire to come out. I closed my eyes and took a deep breath. I was in a sanctuary. I wanted to spend the rest of my day just lying there, under my desk, far away from escalations, meetings and deliverables. I was in a state of relaxation, meditative and calm.

That’s when the fire alarm rang and a friendly female voice announced that there was going to be a fire drill and that all employees were expected to stay calm, and follow the instructions of the Fire Warden for their floor. I ignored the voice, mentally banishing it to remote depths of my senses and went back to enjoying my dark under-table sanctuary. That was when I saw ,from underneath, the dirty black shoes of manager, and his mismatched pair of socks walking towards my desk.

“Where are you? You are the fire warden for this floor. Here, take this helmet, wear it and rally the troops”, he droned, in the voice of the chap who convinced Bahadur Shah Zafar to lead the 1857 mutiny

I got out, with vim and vigour and vowed to discharge my duties as a Fire Warden with glory. I took my bag, as I suddenly remembered that it had a packet of chips from last week’s “Employee of the Month” award ceremony. I was starving and I thought I might munch on chips while waiting outside for the drill to get over.

I wore my helmet, and like Leonidas, urged my fellow employees to leave the tyranny of the office and boldly conquer the outside. I was stopped at the main door by a security guard who told me that bags were not allowed during a fire drill.

“But I already have it, so shouldn’t we be making our exit ASAP?”

“No sir. You have to go back to your desk, leave your bag there, and then continue escaping the fire”

This is more or less untouched, except for the notice, which is new. The initial dialogue originally started out as a fun exercise in trying out similes for different kinds of voices. It’s rather contrived but I had good fun writing it back then, so I let it stay