In India, we do things differently.

And in keeping with the rich tradition of orally imparted knowledge and MMS scandals, we rarely like to write things down, and that is why when we go to “foreign”, we spare no chances in pontificating, elucidating and prognosticating on the Great Indian Difference. In India, we have history. In India, we have ancient culture. In India, we have the world’s most unhealthy kind of vegetarian food. Etc. Of course, elderly Indian gentlemen with NRI children play it both ways, hitting forehands down the line glorifying Western infrastructure and orderliness while slicing backhand drop shots edifying the sanctity of Indian chaos when the audience is melanin-challenged. Even the murderous Blue line buses of Delhi will derive philosophical inheritance from the cosmic randomness of Shiva, especially if there’s a white chap politely paying attention.

For all of the intellectual vainglory, we still steadfastly refuse to update Wikipedia articles – that is left to small minority of passionate enthusiasts, right-wing zealots and Rediff commenters. In fact, the entire Indian internet can be, in the keeping with our ancient tradition of classifying stuff, divided into 5 castes.

But unlike the Chinese, who are forced to live in their own Internet behind the Great Firewall, the Indian Billion has a greater potential to stamp their “difference” on what is today, a mostly Americanized web. Case in point – I can’t seem to get Urban Dictionary to add “Amit” and “Madrasi” despite providing them with a detailed definition and several usage examples. Apparently, they prefer Pop culture to Appa culture. So we need to change our ways. We need to do the online equivalent of the salt march (which of course means a Facebook page + Orkut community + Adobe Flash based candle lighting mass campaign through email attachments) and stamp our Indianness on the web. All of this talking will get us nowhere.

There’s a simple reason for that – it’s already ubiquitous. And it’s very western. We Indians don’t just like something. We are so nuanced that we believe that there are nuances to the word nuance itself.

For starters, we don’t just “like” stuff. We have opinions too.

When we listen to Rahman, we have to point out that Ilayaraja had the best bass lines, and I suspect that Indians will much prefer to see this on Cricinfo player profile pages, where they might as well hard-code “Sachin Tendulkar” in the text box above.

And speaking of Sachin, Rajni and other luminaries, frankly, a thumbs up just does not cut it. In Indian culture, we fall at the feet of our elders and celebrities

Also, after falling at people’s feet, it is part of our culture to take the respect to the next level and “like” something to the point where one wishes to felicitate the author.

Nothing screams “felicitation” more than a silk shawl (called ponnaadai in Tamil).

And what logically follows a felicitation? Yes, a lamp lighting. The largest amount of “like” one can give another human being in India is an invitation to light a lamp at at a college function.

And do we simply “like” something and leave it at that? Have you not seen comments on blogs that go “Hi. Loved your post. Can you read my post on the same subject”? We rarely listen to people. We are usually busy formulating a smarter response in our heads while someone else is talking. So to represent that behavior, it is only fair that we have a custom popup that appears after one hits the “like” button.

It will allow us to quickly select from a drop down list of old jokes, marginally funny pop culture references and dubious facts and send it to the author.

What about women? In the land of a million maruding mahipals meandering motivatedly to misunderstand, misconstrue and misinterpret the slightest mark of civility as an invitation to marriage, women cannot just “like” anything without making their intentions absolutely clear.

Do not forget. We are a nation of men that get strange ideas when we see that a girl has visited our Orkut profile, commented on our blogs or RTed our tweets. And when they use smileys, we notify our parents to initiate horoscope exchanges, so this is no laughing matter. You women might laugh, but for men, it’s matter.

Speaking of mahipals, we also need a “like” button for the citizens of Orkut

We are also a nation of permission takers. What do you mean you can go around liking anyone? In the nation of arranged marriages, you first need approval

After that, a printout needs to be sent to a gazetted officer who will notarize and approve it. Then a copy of the attested form will be sent to the Facebook headquarters where a clerk will make the neccesary “like” entries in the database 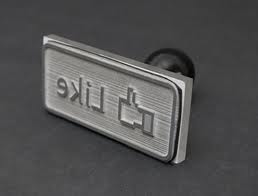 India also believes in viral effects. We have been mass forwarding emails decades before upstarts like Youtube and Twitter redefined viral propagation. With Hotmail, Outlook Express and Microsoft Word, we understand viruses better than anyone else, in every sense of the word. So it is only fair that the “like” button also send out mass emails to everyone in everyone’s contact list (not in the Bcc: field, but in the To: field). The email itself can go something like this

“If you forward this link to 10 people and get them to click the Like button, Bill Gates will make Lord Balaji grant your wish by making a 10 million USD donation to TTD which will then be used to rename the Taj Mahal to Tejo Mahal and also find an Ayurvedic cure for cancer, impotence and Pakistan”