Single celled organisms swimming around in the primordial ooze met up with each other for dates, eventually forming multicellular organisms that then evolved the ability to move around and meet up with other like minded organisms to be fruitful and multiply into early fishes that, several million years ago, walked on to dry land on clumsy fins that served as the first legs, only to evolve into reptiles and eventually mammals. One branch, of a particularly resourceful ape-kind, eventually colonized the planet, achieved the pinnacle of nature and then, for some inexplicable reason, invented air travel and started eating that unnatural abomination known as airline food.

If those early bacteria knew that the crowning achievement of Life on Earth was going to eat dubious organic matter microwaved to oblivion and served in aluminum foil, they’d have stopped going out on dates and stayed at home posting updates to Twitter and Facebook.

Airline food is the sort of nightmare mommy stomach cells warn their kids about. If kitchens were reactors, airline food would be nuclear waste and as a frequent flier, I experience Chernobyl every time I fly. And for this reason, I decided to stick to the “Asian Vegetarian Meal”, which, in the manner that teargas is better than Agent Orange, is slightly safer to consume than fauna-based offerings. But as you will soon find out, airlines manage to serve the sort of Asian vegetarian meal that would have justified George Bush’s claim that Iraq had biological weapons.

For starters, I cannot imagine that kitchens populated by regular Homo Sapiens can produce this sort of food (and I use the term “food” rather loosely here). In fact, I strongly believe Flight kitchens are located here:

Here is the anatomy of an airline meal. It is a plastic tray adorned by several accouterments such as a teacup, a small paper bag of cutlery, a cup of something indescribably seedy looking which the flight attendant will claim is a salad, a small dessert that will usually be dry enough to deserve the loss of the extra “s”, and finally, the 2in x 4in aluminum foil box that holds what can only be charitably described as “food” and only hypothetically termed “edible”.

In the middle of this box, is something that resembles rice, rice that was apparently banished from the wet fertile fields of the tropics to the Gobi desert in summer.  It is also heated to near plasma temperatures in a blast furnace. Then it is stored for several years along with large amounts of Silica Gel. Any renegade, insurgent water molecules are dealt with the swift brutality of Moammar Qaddafi. Then the flight attendant blowdries it using a hair dryer on “High” setting before serving it to you. Just in case.

To its left is a yellowish ooze. If any pasty-looking off-whitish cubes are visible, it’s probably paneer. Paneer, after a stint at Abu Ghraib, that is. If it isn’t, it’s likely Dal. Dal tends to vary between #5c2700 and #d5ad42 in colour and can occasionally contain a few green lumps that Popeye might have consumed (and thrown up). The amount of Dal is also adjusted to ensure that it either outlasts the amount of rice OR leaves behind several spoonfuls of dry rice that are waiting to poke holes in your oesophagus.

To the right of the rice is an amorphous dark complexioned mass of coagulated vegetables fried till kingdom come. Occasionally, it promises to be potato, a vegetable that is remarkably hard to make a bad-tasting dish out of, but the airline kitchen staff at Isengard seem to have mastered this skill. The combination of terminally ill potatoes, age-old spices of the kind found in Indian grocery stores in the US and the extreme microwaving make any potato dish taste downright metallic, somewhat like the oven itself. It’s as if the dish gave up any semblance of individuality and freedom under the harsh supervision of Isengard and let itself be subsumed by the Ferrous elements involved in the entire cooking process.

But no meal is complete without some form of bread, and the standard “Asian Vegetarian Meal” comes with a bun that is a choking hazard even for one of the Transformers. If one does not have dental insurance, it is best left alone. And the demoniacal chefs at Isengard also seem to like irony. They also give you a small slab of butter, as if to say that you can “try” softening the bread with it. But one does not entertain Genghis Khan with a Karan Johar movie, kill Bill with a Deepavali cape gun, or try to soften the “Bun” with butter. The “Bun” scores higher on the Mohs scale than Diamond. The “Bun” was likely baked in the depths of the Earth’s core. In fact:

But as always, I am not one to simply crib and leave the scene without offering a solution. I believe airlines can learn from trains. 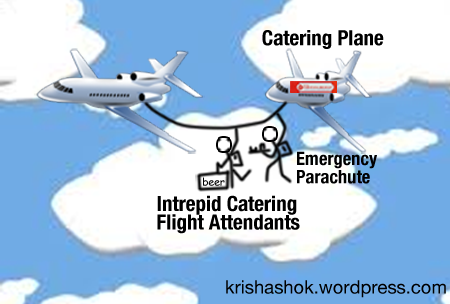 ps 1: This post is an extended version of a short column I originally wrote for DNA (warning: pdf)

ps 3: Do me a favour and go get yourself the Mozarellasura Linguini Stotram callback tone. Instructions here