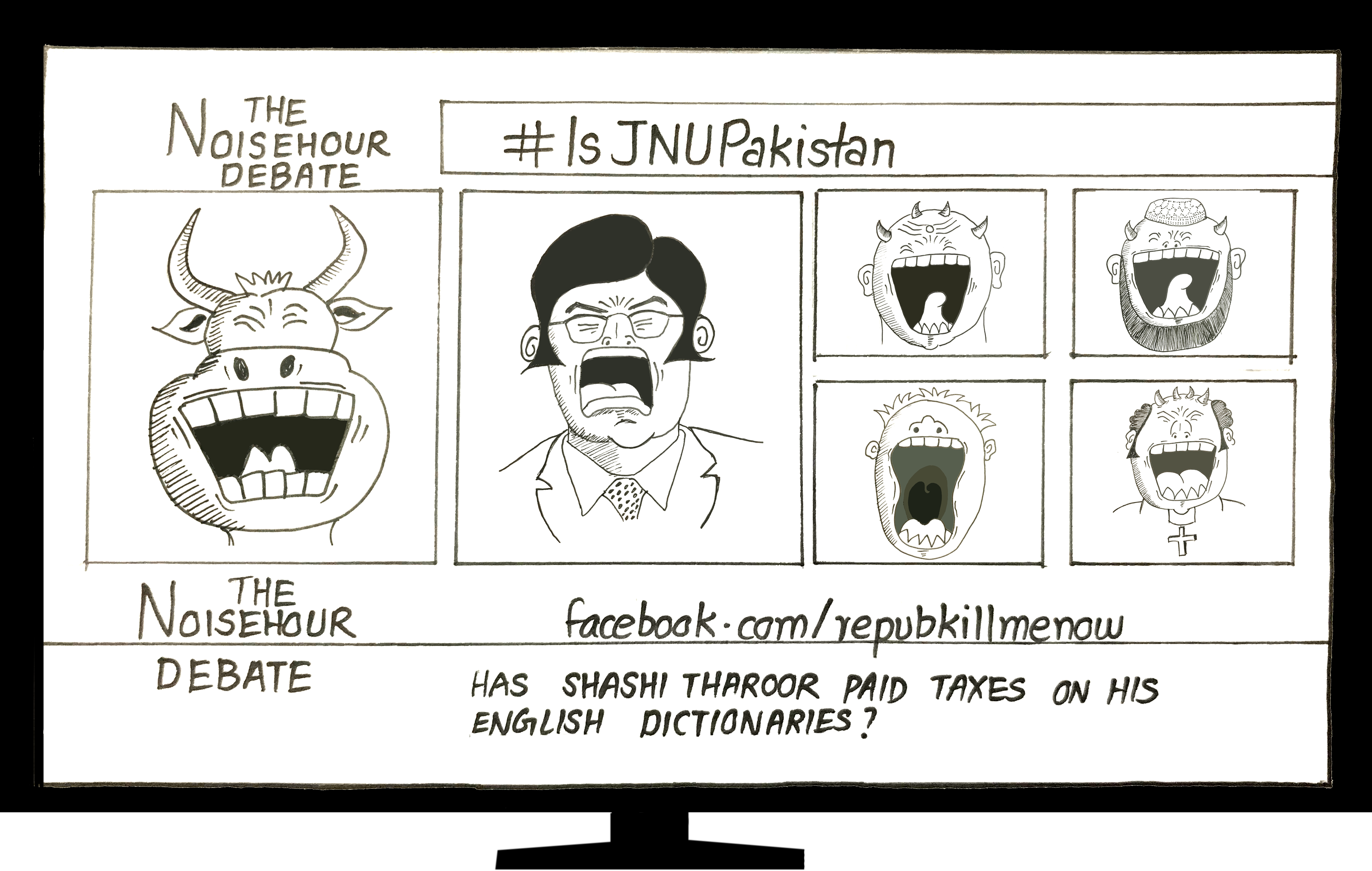 Tonight’s programme is going to be different. The Nation demands to know how a prime time TV panel debate is designed by my illustrious channel. So, tonight, instead of just seeing a debate in action, I will take you through the backstage process that we have perfected over the years. Some viewers might wonder why I am revealing our trade secrets to the world, but like Elon Musk, I believe that the nation will not improve till every TV channel in every regional language puts the nation first and transforms news into a choreographed cockfight between false equivalences every. single. night.

Our day begins in the morning, when we sit in a meeting room looking at the news stories of the day.

For example, today, we had the following stories.

Story number 2 is boring because the experts who understand this shit are terrible on TV. Our viewers would rather watch paint dry. And again, if the impact is unseen, let it stay unseen no?

Story 3 requires actual investigative journalism, like we have to actually send reporters to Bihar and research the story. Our training budget only covers “Shove mic into Shashi Tharoor’s face”, so forget about it. While we can work in a political angle, like maybe go all the way back and blame the Mauryas for the poor state of healthcare in Patna, we can’t bring a radical mullah, fundamentalist pastor and an outraged godman into this, so the story is rejected.

Story 4 – Now that’s what we run with. Hey social media intern, trawl though her Instagram feed and find me the hottest pics she’s posted. While we are going after the outrage angle, let’s not forget that titillation brings us an extra audience. Actually, in many cases, the same fellows get titillated and then outraged.

Now that we have the news story, we move on to lesson 2

At this point, many of you might wonder – on the face of it, is this even worth a debate? It’s just someone who is using her personal social media account to post a picture of herself. Also, do we really think our gods are so insecure that they don’t like being featured on modern clothing? Not a big deal really. I mean, how do we deal with rebellious young people who cock a snook at religion at home? We mostly just either ignore them, or at the very least, we tolerate them. That’s the normal course of things in a religion that prides itself on tolerance, no?

WE ARE TV NEWS. OUR JOB IS NOT TO CURATE THE NORMAL. IT’S TO AMPLIFY THE ABNORMAL.

WE ARE IN THE BUSINESS OF CURATING AND AMPLIFYING RARE EVENTS AND MAKING THEM SEEM LIKE THE NORMAL COURSE OF EVENTS. ACTUAL NORMALITY IS OUR ENEMY.

WE ARE NOT IN THE NEWS BUSINESS. WE ARE IN THE OUTRAGE MONETIZATION BUSINESS.

So our debate title is – Does Durga belong on a Tank Top?

For all things t, there is a fringe outraged group g. The key to a successful debate panel is to find as many extremist outraged groups as possible.

If the picture of the goddess had been on a regular T-shirt, there’s no cause for outrage here. But if we define a positive length l between the hemline and waistline, l is the gap of moral decay. The more the l, the more outraged parties we can find.

Now who are these outraged groups. At the top of my head, I can think of 3 obvious candidates.

Now, if you think that looks like a comprehensive list, you are wrong. That’s why I’m the primetime host of a noise show and you are not.

You forgot number 4. Men’s rights activists!! Sanskaari uncle is fine, but we can also invite a young guy convicted under section 498A to provide his perspective on why women get away with things that men would be crucified for because there is misandry everywhere.

For each outraged group, find a counter outrage group that this group hates. And more importantly, find a particular individual who the outraged group will loathe from the bottom of their hearts.

For panelist 1 (men who cannot tolerate independent women) – let’s find a 20 year old feminist, and let’s make sure we let her interrupt the Sanskaari uncle every 2 minutes. Get her to wear a #YesAllMen T-shirt as well.

For panelist 2 (the upright religious types) – Let’s get a gay sex toy designer for this. Nothing pisses of religious nut jobs more than gay people. Also, make sure he is dressed in leather and is wearing black lipstick.

For panelist 3 (the Y U ONLY VILIFY HINDU whiny godman) – let’s get the most unhinged fundamentalist, medieval minded Imam and a Crusading, Inquisition seeking, frock wearing hardcore catholic priest with a “Conversion 4 Lyf” tattoo on his cheek. They can counter the baba’s view that only Hindu symbols are denigrated.

But we are not done. That’s 6 people. We need one more person, so that we have 8 with the host. We need an actual expert on Hindu symbology. Let’s get a white, female academic who specialises in Hinduism and get her on Skype. That way, the uncle ji and baba are guaranteed to get triggered and go after the “you orientalizing western outsiders” angle as well, and being female, we will certainly get a healthy entertaining dose of misogyny as well.

PS: I tried hard to see if I could squeeze in a retired Pakistani Major-general into the panel but couldn’t.

Let’s start with the #hashtag. I recommend #DurgaInATankTop

I know what you are thinking – shouldn’t it be “Durga On a Tank Top”, since that’s a more accurate representation of the actual event?

NO. THE EVENT IS WHAT WE SAY IT IS. NOT WHAT IT ACTUALLY IS.

Think about the kind of shallow minded, lazy bigot (ps: our audience) who jumps to conclusions based on newspaper headlines and hashtags. Now, consider what will sound more outrageous to him. Durga on a tank top, or Durga in a tank top. The latter is more outrage worthy, and will get us more shares on Social media from people who can’t be bothered to actually find out what the actual story is. If someone calls us out on the semantics of “in” vs “on” we will call them “Shashi Tharoor Elites” and move on. Let people assume the worst.

IN FACT, IT IS OUR JOB TO MAKE PEOPLE ASSUME THE WORST.

Now, for the social media headlines.

You might wonder, why different headlines? Why not just the debate title?

That’s why you are a luddite and I’m a primetime TV show host. Our social media strategy is to try and target groups of people who are likely to support our guests.

The idea is – Frame a sentence that one of our unhinged extremist panelists is vehemently going to agree with, and then turn that into a question – It will lend an official stamp of journalistic approval to that extremist viewpoint while attracting closet bigots with that confirmation bias to come watch our show. We are not saying we agree with that viewpoint, but we are not saying we don’t either.

Is it ok to hurt religious and traditional sentiments in the name of a woman’s right to personal expression?

But it’s too many words. Our audience has a short attention span topped with confirmation bias. We need to hit home with brevity. So I’d recommend

Has FoE gone too far when it puts Durga on a tank top?

Durga Desecration: Are other religions getting preferential treatment?

I know, some of you might go – Hey, Betteridge Law states that any news headline that is framed as a question can be safely answered by No, but that’s for print journalism and a wise, informed audience.

Our question template is rather simple – Have you stopped beating your wife yet?

Our job is to take nuance out of every complex subject and turn it into simple yes or no questions. People prefer the certainty of ignorant confidence than the uncertainty of informed doubt.

Sometimes people ask if journalism should be about holding a mirror to society. It is, but I’d make a small change to this apparatus. I’d place a convex lens in front of the mirror that will let us focus on just a few things, and once in awhile, we can turn the convex lens towards the sun and start a small fire at the place we want to focus on.

THE NATION DEMANDS TO KNOW WHERE THE FIRE (we started) IS.

Ps: you can listen to this while you read this post https://soundcloud.com/parodesynoise/interrupception