I have been asked by several friends, colleagues and other specimens on my two cents on the Dayanidhi Maran issue. Now I have a fundamental disinterest in Indian politics. Its dark humour now fails to make me laugh and its exasperating ineffectiveness has dried up all my tears. So, rather than humour everybody with a lengthy diatribe on the immorality of the unceremonious chucking-out of Mr Maran, I present to you a visual representation of Indian Realpolitik. And its not intended to be funny.

To start with, Dayanidhi might be the poster boy of Indian politics, but…. 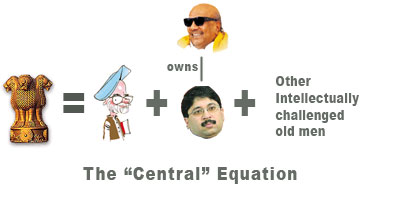 So…if Azhagiri is cut out, DMK will fall..and so will Manmohan Singh’s government and some other buffoons will then lead the country…such as these….

So in a nutshell, this is what I think of the Maran issue. Of course, its immature. Of course its uniformed and puerile. But as I said, Indian politics does not interest me and deserves nothing more than my jilpa