A couple of weeks back, I saw something in Landmark that provided fodder for this post – A DVD box-set of Ramanand Sagar’s Ramayana. A couple of days back, I saw a DVD-rip torrent of the same thing on the web, and that was when I realized that while Mr Sagar had actually done the people of India a great service by making that televised version, he had actually done great disservice to the epic itself. Not because he was inaccurate, but because he managed to convince most of our population that his version is the seminal, authentic version.

We are a diverse country but yet, at times, I am not entirely sure if we well and truly cherish that diversity. For instance, a lot of people would like to believe that our oldest epic is really one powerfully common story that connects all of us and gives us a unified sense of identity and provides us a clear delineation between good and evil. Like Mr Sagar’s version.

according to the Dasaratha Jaataka,

Rama, at his father’s insistence, takes Lakshmana and Sita, and decides to spend a few years in the forest, generally chilling out, shooting game and making deer jerky and barbeque. News then reaches them through a Pushpaka SMS that reads “Dsrth is ded. pls cm hm”. Sita and Lakshmana flip out, start grieving mightily, shed bucketloads of tears and generally behave like characters in a Tamizh soap serial on Kalaignar TV. But Rama remains expressionless like Ajit in Billa and refuses to let grief overwhelm him. This is because, he is merely the Buddha in one of his many earlier births. He notes with characteristic detachment that all lives are impermanent, and goes on to lecture his sibling and wife on the need to conserve water by learning to keep ones tears in the thanni lorry of one’s mind. Later, all three return to the kingdom, where Rama-Buddha rules justly for many years.

According to Krrtibaasa’s Bengali Ramayana,

Rama was a Vaali-backstabbing, wife-dumping character who finally faces his 2 virtuous sons, Lava and Kusha, in battle, after the twins had dispatched Bharatha, Shatrughana and Lakshmana like VVS dispatches deliveries on middle and leg. While jackals and hyenas were enjoying full meals on the battlefield, Lava and Kusha proceed to humiliate and insult their father for trying to avoid fighting with his own blood (‘Ada chee, dialogue nirutthittu sanda podu nainaa’). Rama goes into a rage but ends up losing and still manages to wallow in some kshatriya pride despite falling to his own sons. He is happy that he has never been defeated by somebody from another lineage.

Lakshmana sends an IM message to Rama and Sita – “Dudez, you gotta check these Youtube videos out” and proceeds to share a bunch of video links, each of which show a different version of the story of the Ramayana. In some Rama is a hero and in some he is just another unscrupulous mortal. Some of the stories are about Raavana’s side of things, about how he rescued a willing Sita from an abusive husband and the tragedy that befell his family as he was pulled into an unnecessary war of aggression featuring bridge-constructing simians and invective spouting north indians (UPites) shouting – “Abe madraasi, baahar aaja” outside his gate. One other tale involves Sita jumping into Raavana’s funeral pyre after expressing disgust at Rama’s doubts about her fidelity. At the end, Rama reflects on all these versions and learns from his mistakes and becomes a better man.

Well, my translations might be a tad unnecessarily contemporary, but the main point is that there are several versions of the Ramaayana in India, from the well known, mainstream versions (Valmiki, Tulsi, Kamban etc) to the richly diverse folk tellings of rural India. Sort of like Linux, you know. A more or less common kernel with a thousand or more flavours evolving over a period of time. It’s almost as if the Ramaayana was composed open-source style. Perhaps there was somebody like Jimmy Wales who set up a wiki (short for Walmiki in those days) platform and invited poets and bards from all over India to collaboratively author the epic. 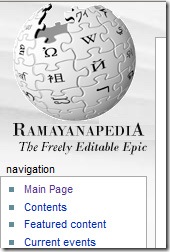 I can imagine that certain pages were very busy in terms of debate and discussion.

Perhaps they had some editorial guidelines as well,

And yet, some of the edits probably violated the Neutral Point of View guideline.

and perhaps, some of these spirited fights made it to the front page of digg in those days, along with other important news items of that age.